Spiritual but not Religious, or Spiritual and Religious?

“Come into the circle of love and justice.
Come into the community of mercy, holiness, and health.
Come and you shall know peace and joy.”
(Reading #418, Adapted from Israel Zangwill)


“You're an interesting species. An interesting mix. You're capable of such beautiful dreams, and such horrible nightmares. You feel so lost, so cut off, so alone, only you're not. See, in all our searching, the only thing we've found that makes the emptiness bearable, is each other.”
(Carl Sagan--Contact)

The rise of the Nones, and the Spiritual but not Religious

In 2012 the Pew Religion and Public Life Project reported that nearly 1/5th of those polled were not religiously affiliated. They were “none’s”, not Catholic, Muslim, Universalist, Buddhist, or protestant. Among those, nearly 37 percent reported being “Spiritual but not Religious”. That’ was 7% of all Americans. This number had significantly increased by 2017. 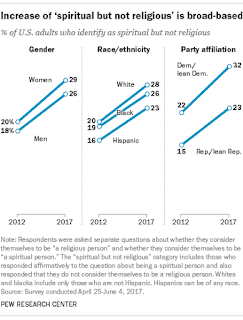 This month, the Pew Research Center released a new report titled “America’s Changing Religious Landscape, Christians Decline Sharply as Share of Population; Unaffiliated and Other Faiths Continue to Grow.” This survey compared numbers from 2007 to those from 2014, and found that the proportion of adults who consider themselves Christian fell nearly 8 percentage points, while the percent of those listing “Unaffiliated” grew 6.7%. Unitarian Universalist numbers were essentially flat, while there was a small uptick in those affiliating with liberal religion in general.

But what does it mean to be “Spiritual but not Religious”? People who have attempted to survey these people have found that they do think about deeply about issues surrounding theology, God, the afterlife, ethics, etc., but they are generally distrustful of formal religious institutions. And who can really blame them? Yet they participate in many “groups”. Meditation groups, health groups, yoga groups, online support groups, etc. It’s as if these “groups” have replaced the role of organized religion in their lives.

But why are so many people leaving organized religion behind? And what can modern Churches do about it?

Is it because of sexist or homophobic attitudes in traditional Churches? We might think so, and I certainly left my previous Church community because of homophobic attitudes in that Church. However, Churches that liberalize on these issues, ordaining women and supporting gay marriage, often see marked membership declines. Experience has shown that in such situations the religious conservatives among them leave, and then the social liberals do not join, many of them are already quite happy being “nones”. So while this might account for some of the decline in religious affiliation, it can’t account for all of it.

Is it that these religions teach fundamentalist and nonsensical things, like young earth creationism, that has been countered by science? It doesn’t appear that this is the case either. Nor are people leaving organized religion because they are no longer interested in believing in God. While atheism and agnosticism have grown in America, many of the “nones” and “Spiritual but not Religious” say that they believe in God. It’s belonging to CHURCH that they aren’t interested in doing. But why?

Is it because the Church services are too “formal”, and they just need to play better music? Hire a rock band or something? Again, I don’t think that’s the issue.


Is it that they need to stop teaching people about moral and ethical behavior? Perhaps people are offended, and want to do their own thing, sin without the preacher telling them they are doing something wrong? Again, I don’t believe that this is the issue at all. People are hungry today for moral teachings, for help in figuring out how to live a life of meaning and purpose.

Presumably those here find benefits in religious affiliation. You find value in Church, and in attending Church, or you would not be here, at Church! In that sense at least everyone here is “religious”.

I believe that the real issue here, the real problem (if religious un-affiliation is, indeed, a problem) is that we, as religious people, have simply failed to teach our children what value we find in religious community, in belonging to a Church. When our children ask us why we bother going to Church on Sunday, what do we say?

Why do Religious Conservatives Attend Church?

Why do we go to Church anyway? Some of us are atheists, and the rest of us tend to be rather liberal in our beliefs about God, heaven, and hell. So why would atheists, agnostics, and liberal believers, of all people, get up on Sunday morning to put our buts in a pew, sing some songs together, and listen to a sermon from a guy like me?

Well, why do conservative religious people attend Church? Clearly some percent of them do so because they fear the eternal punishments of Hell. Another percent of them do so because they want to receive the beautiful rewards of heaven. But is that it? Fear and selfish greed? Is it truly the case, that if you become a Universalist, Liberal, or Atheist, such that you believe that Church attendance has no direct role in our state in the afterlife, thereby removing these two motivations, that there is no reason left to attend Church?

I don’t believe so. And even for conservative believers there are other reasons people attend Church. Devotion to deity is an important consideration. Many attend simply because they love God, and enjoy feeling close to “Him”. Others love their fellow man, and therefore desire to belong to a community where they can be organized to serve others, by preaching their doctrine, (helping others reach heaven) or by attending to the more physical needs of others, such as feeding, clothing, and serving the poor. These are all reasons why conservative believers attend Church.

And then there is the reason that I believe is by far the most important. The building and shaping of human community.

The benefits of Community

Human beings are social animals. In this sense, we are more like bees, or a pack of wolves than we are like chimps.

For us, community matters. Economists call it “social capital”. We have monetary capital. This is the case we have at our disposal. But we also can have other resources, tools, machines, cars, houses. This too is capital, although not liquid capital. Each of these things enables us to do something we could not do without it. But then there is community. This is capital too.
Consider the community of marriage. This is an ancient human institution. And the evidence is that it can provide many benefits. This is not said to judge those who choose not to marry, but to simply point out the ways that a marriage (if it is a happy and good one) can benefit those who enter into it. They can now split the economic and social burdens of life. They pay one mortgage instead of two, and they can work together to produce economic stability and to raise children. But they also know that there is someone there who will care for them, even if they are ill, or disabled, in sickness and in health, for richer or for poorer. The statistical evidence for the benefits this offers are clear and largely un-ambiguous. For whatever reason, the largest statistical predictor of poverty is, in fact, divorce, for either the mother (who usually ends up with the children) or for the children later in live.

That is one reason why it is so important for us to provide means to strengthen families, to help people make better decisions in choosing a partner, and to help people in these partnerships (that we must admit are NOT always easy), to learn how to interact with each other in better and more productive ways. And this is also the reasons that it is so important for us to fight for marriage equality, so that these benefits can be extended to a larger percent of the population.

Family is at the center of most of our social lives. But humans often need more. Marriages sometimes fail, and even good marriages are not enough. That is where the wider community steps in, and it is where a Church community can provide important benefits.

Why do We Attend Church?

I know that I was so hurt by the lies I was told by my previous religious institution, that the idea of joining with another religious institution was a daunting thought. My trust had been shattered, and it was difficult to see how I could ever trust another “Church” again. What if they lied to me too?

But eventually, the hole in my life, left by the absence of my Church community grew too large for me, and I had to risk being hurt again. Benefits sometimes involve taking risks. This was a risk that I chose to take. And the benefits have made it worth the risk.

Recently I was having dinner with a member of our congregation who said that she was “Religious, but not Spiritual.” When I asked her what she meant by that, she said that the community was so important to her, that she joined just to find those benefits, regardless of her spiritual beliefs and feelings.

She also said that she believed that humans naturally seek out such communities of support. She worried that if a liberal faith family could not provide those human needs, then it left her Children vulnerable to religious fundamentalism. If they visited another faith, and found that that faith met their spiritual, emotional, and social needs better than their own isolated family life, the result might be a confusion between these social benefits, and the truth of the fundamentalist message. To prevent that, she had reached out to the Unitarian Universalist Church, hoping that we could provide those human needs for her family.

If we are truly Universalist, then religion can’t be thought of like some competition, where the number of people who affiliate with our particular religious community determines who “wins” the competition. Like some world wide basketball game, played with human beliefs, hopes, dreams, and lives.

Nor should we necessarily shape ourselves in such a way that we would win the most converts to our cause. How we define success matters. There’s a popular song sung in many Churches that says “Do what is right, let the consequences follow.” I believe this. And if we end up creating a religious community that appeals only to a relatively small percent of the population, that is not the end of the world, so long as we provide a service that this small percent of the population finds to be useful, that helps them to build a community of love, and that blesses their lives in constructive ways.

And who is to say that the nones are wrong to not affiliate with any religious organization? If they experience the divine in the proverbial sunset more than in the pews at Church, can we blame them? People are different, and different paths benefit different people. Certainly we did not fail them, if they find that they prefer a different path from the one we took.

But what if we are providing a service that might benefit these people, and they simply do not know it? Then we might truly be said to have failed. Or what if our children of the rising generation could be getting something of value from Church attendance, and simply don’t know it. Again, we might then say that we have failed.

I don’t think that this means that we should be going door to door proselyting our flavor of religious community. But it does mean that we should strive to offer useful services to the community, and to let the wider community know what it is that we offer.

I hope that we can share what we offer, and find those who will benefit from it, without pressure or judgment.
Posted by jlcarroll@gmail.com at 1:52 PM